View basket “Marjorie Grant, Latchkey Ladies” has been added to your basket.

First published in 1920, this powerful satire by Rose Macaulay is about the Potter newspaper empire, and the ways in which journalists struggled to balance the truth and what would sell, during the First World War and into the 1920s. When Jane and Johnny Potter are at Oxford they learn to despise their father’s popular newspapers, though they still end up working for the family business. But Jane is greedy, and wants more than society will let her have.

The Introduction is by Sarah Lonsdale, senior lecturer in journalism at City University London, and the author of the Introduction to Handheld Press’s best-selling edition of Rose Macaulay’s What Not (2019).

Watch our video about why we republished this book.

Have you seen our vividly no-nonsense postcards? You can inspect and order them here. 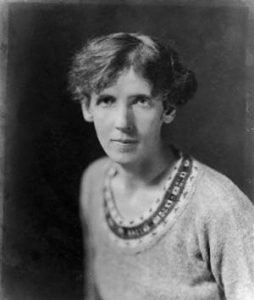 Others in the Potter newspaper empire are drawn into Jane’s destructive little ways. Mrs Potter is a well-known romantic novelist, whose cheap novelettes appear in the shop-girls’ magazines. She has become unable to distinguish fact from fiction, and her success gives her an unhealthy estimation of her own influence. When she visits a medium to try to find the truth about the murder of her son-in-law, she wreaks terrible damage.

Arthur Gideon works for Mr Potter as an editor. He respects his employer’s honesty while he despises the populist newspapers he has to produce. His turbulent campaigning spirit, and his furious resistance to anti-Semitic attacks, make him unpopular, and becomes an unwitting target of malice.

Subtitled ‘A Tragi-Farcical Tract’, Potterism is satirical, tragic and heart-breaking. It will outrage you, and fill you with sympathy for the victims who suffer under the Potter women’s urge to write.

‘Rose Macaulay’s perceptive post-war observations about the 1920s have great relevance for what we are living through now. Handheld are republishing Potterism in August, and what with ‘woke’ culture and confidence in the media currently undergoing a bit of a wobble, there couldn’t be a more apposite moment to read it.’ – Dove Grey Reader

‘A current concern that has its roots in those days was the attitude, in the press as much as in wider society, of British exceptionalism, ‘we hate all foreigners’. Potterism, published in 1920 … had something to say about this attitude, especially when expressed as anti-Semitism. She was an advocate of values, truth and integrity.’ – Bookword

‘The reason to read Potterism, though, is that it’s far more than the sum of its parts. It’s slyly funny, perceptive, clever, compelling, relevant – everything you might want to read over a lazy weekend. It’s also full of razor sharp observations, which makes it a book I want to re-read (possibly with a pencil for some underlining) with attention to tease out some of the things Macaulay has to say for more lengthy consideration. Which is the hallmark of a Handheld book – they all have a lot going on just under the surface.’ – from Shiny New Books

‘Wrapped up in the actions and words of this cast of characters is a timely and authentic portrait of the time. There is a simplicity to the writing, a wit that is stark, sharp and revealing. The novel is steeped in the feeling of the age. Tackling subjects such as spiritualism, rise of socialism, emerging changes in class structure, antisemitism and much more, here is a biting social commentary on the press; its uses and misuses.’ – from Bookbound

‘That this novel should be re-issued at a time when many people are concerned with the rise of fake news and Facebook algorithms is very timely. That a novel first published in 1920 should chime so loudly one hundred years later makes it surprisingly relevant.’ – HeavenAli

‘Potterism was first published in 1920 and was recently republished by Handheld Press, and if ever there was a book for now this is it. It’s somehow reassuring to discover that human nature changes very little … That reactions to extreme life and world events remain equally unpredictable and perhaps, dare I say, are occasionally bizarre and incomprehensible … With its themes of women’s lives, and the limitations of marriage and childbirth, along with a fascinating element of anti-semitism (Rose Macaulay was most definitely not anti-semitic but portrays it astutely) I must now confess that I read this cover to cover back in July, and couldn’t put it down.’ – Dove Grey Reader

‘Beautifully produced with a stylish cover design – very much in line with the book’s early 20th-century setting. In essence, the novel is a satire, one that allows the author to cast a critical eye over many subjects including socialism, spiritualism, religion, the ethics of war and, perhaps most importantly, the powerful nature of the newspaper industry … a timely and rather prescient commentary that continues to resonate one hundred years on’ – JacquiWine

‘[In Potterism] the media can be used for the evil inclinations of one individual, and yes, it requires the collaboration of those in charge, and yes, it often gets away with it because people want to be entertained by their news. … Could have been written in 1920, when the world was firmly divided into elites and everyone else, when women’s opportunities were curtailed, when antisemitism was casual and rampant,
when a country grappled with war and its consequences, and when wealth was intimately entwined with privilege and entitlement. But also, it could have been written yesterday.’ – Lilith

You may also be interested in these books by Rose Macaulay

What Not. A Prophetic Comedy is Rose Macaulay’s 1918 novel of a future eugenicist England, suppressed for potential libel, after which it vanished from sight. This novel was a significant influence on her friend Aldous Huxley’s Brave New World.

Personal Pleasures. Essays on Enjoying Life is Macaulay’s 1935 anthology of essays in which she tells us about the pleasures of her own life. Witty, urbane, ridiculous and delightful, these reveal glimpses of her life as an independent and sociable woman of the 1930s (2021).

Dreaming of Rose. A Biographer’s Journal: Sarah LeFanu’s memoir of researching her biography of Rose Macaulay, while juggling the demands of teaching and broadcasting. For life writers, lovers of biography, and those interested in the nooks and crannies of Macaulay’s life and work.

If you’re interested in the cover, watch this short conversation with the Mary Evans Picture Library on how we chose it.