Read all about the background to this remarkable novel, as written by Alison Flood for the Guardian in December 2018.

Claire Hazelton reviewed What Not for the Guardian in March 2019: ‘Her writing is stirring, funny, uniquely imaginative. This book should not be forgotten again.’

Have you seen our splendid postcards? You can inspect and order them here. 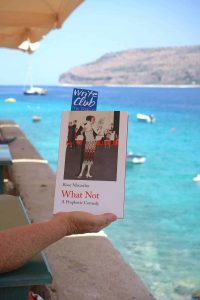 ‘What Not is barely mentioned in biographical writing about Macaulay, said Kate Macdonald at Handheld, “probably because it wasn’t much noticed at the time, due to its withdrawal and lack of advertising on its reissue. The plot’s themes and subject matter were also challenging, not anything like as accessible … as they are now”’  The Guardian (10 December 2018),

‘The book is a protest against social control, but a love story at heart. As Kitty and Nicholas’s love grows like an “embryo”, Macaulay emphasises its naturalness: “their relationship burgeoned like flowers in spring”. Her writing is stirring, funny, uniquely imaginative. This book should not be forgotten again’, The Guardian (28 March 2019),

‘Aided by an enlightening introduction, along with the handy end-notes to illuminate any mystifying period-specific detail, What Not is an often witty, wild ride that deserves rediscovery.’ The Times (13 April 2019)

Margaret Drabble reviewed What Not in the Times Literary Supplement: ‘It is a more sombre work [than Brave New World], with a sense of end-of-war fatigue that has more in common with the mood of Orwell … full of interesting sociological and historical observations, about the status of women newly enrolled in government employment by the war machine (Macaulay herself had worked in the Ministry of Information, as had Wells and Arnold Bennett) and about minor points of etiquette, such as whether “you can suitably go to church with a dog in your muff”.’ (7 June 2019)

‘This edition continues Handheld Press’s commitment to reprinting classic sf and fantasy, but this work is especially important as it presents Macaulay’s novel as she intended it.’ Paul March-Russell in Foundation (2019).

From Nick Hubble in BSFA Review 9: ‘it probably makes sense to see What Not as a comically resigned lament for the impossibility of evading the cruel stupidity of life without imposing a system that is even crueller and more stupid. However, there is also just the faintest suggestion in Kitty’s momentary out-of-body experience, in which she realises the entire society depicted in What Not is no more than a “queer little excited corner of the universe”, that other worlds are possible. ‘

From the Women’s Revew of Books: ‘Throughout What Not, Macaulay’s writing moves smoothly from concise observational beauty … to biting social commentary lampooning both public pretensions and unchecked governmental power. What Not has a delicious snark, which, for all its antiquated turns of phrase, makes the novel feel surprisingly fresh. With its depiction of a successful revolt as a mass movement, rather than the fight of a few enlightened individuals, What Not is a rare dystopia. Asking many questions about the ideologies wielded by charismatic leaders in the service of authoritarianism, whilst centering the experiences of working, independent women, What Not is a century old and yet unexpectedly relevant.’ (June 2019)

Potterism: A Tragi-Farcical Tract is Macaulay’s 1920 novel of truth, lies, slander and the British press.

Personal Pleasures. Essays on Enjoying Life is Macaulay’s 1935 anthology of essays in which she tells us about the pleasures of her own life. Witty, urbane, ridiculous and delightful, these reveal glimpses of her life as an independent and sociable woman of the 1930s.

Dreaming of Rose. A Biographer’s Journal: Sarah LeFanu’s memoir of researching her biography of Rose Macaulay, while juggling the demands of teaching and broadcasting. For life writers, lovers of biography, and those interested in the nooks and crannies of Macaulay’s life and work.