RUNNER-UP for the 2021 Vondel Translation Prize! 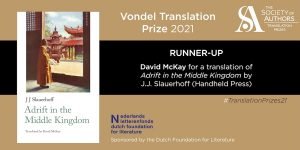 Jan Jacob Slauerhoff (1898-1936) was a ship’s doctor serving in south-east Asia, and is one of the most important twentieth-century Dutch-language writers. His 1934 novel Adrift in the Middle Kingdom (Het leven op aarde), is an epic sweep of narrative that takes the reader from 1920s Shanghai to a forgotten city beyond the Great Wall of China.

Have you seen our colourful postcards? You can inspect and order them here. 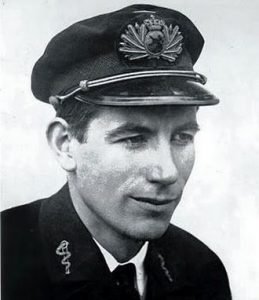 The narrator of Adrift in the Middle Kingdom is a Belfast ship’s radio operator, desperate to escape the sea, who travels inland on a gun-runner’s mission. He moves through extraordinary settings of opium salons, the house of a Cantonese watch-mender, the siege of Shanghai, the great flood on the western plains, and the discovery of oil by the uncomprehending overlord in the hidden city of Chungking. The fantasy ending transforms the novel from travelogue and adventure to existential meditation. But running like a thread of darkness through the story is opium, from poppy head harvesting to death through addiction.

This translation of the novel by David McKay, winner of the 2018 Vondel Translation Prize, is the first English edition of Slauerhoff’s most accessible and enthralling novel. The Introduction is by Slauerhoff expert Arie Pos and Wendy Gan of the University of Hong Kong.

‘After reviewing the winner of the 2021 Vondel Translation Prize last Friday, here I am with the runner-up. The only reason Slauerhoff’s novel was in my TBR, is because of the effusive praise that Handheld Press titles have been receiving in my twitter and blogs feeds … the second half of novel differs substantially from the first in ways beyond suspense. The gritty geography and realistic feel of Taihai (a thinly disguised Shanghai of the 1920s) contrasts greatly with the almost medieval, closed-in city of Chungking; a city borne entirely from Slauerhoff’s imagination, and which spectacular developments, including the discovery of oil, show cannot survive. Modernity will have its way.’ – Lizzy’s Literary Life

‘A gritty, realistic, and beautifully detailed snapshot of life in inter-war Amoy and Shanghai ‘, from China commentator Jonathan Clements, author of A Brief History of China

‘A curious mixture of detailed travel writing inspired by Slauerhoff’s lived experiences in China, and fictional adventure that merges increasingly into existential fantasy … Slauerhoff’s depiction of China is gritty and uncompromising’, The Fantasy Hive

From Simon Lavery, ‘It’s expressed in terms of a modernist European alienation narrative, and comes to its hallucinatory, mystical conclusion in a kind of Chinese-Elysian poppyfield of earthly-heavenly delights.’

See also this good review from the Complete Review.

And download this one from The Pilgrim’s Sept 2019 issue:The Pilgrim review of Adrift Sept 2019

Watch our video, in which we explain the background to the novel, and its curious relationship with history and fantasy.