Melissa Edmundson, editor of Women’s Weird and Women’s Weird 2, has curated this selection of the best of Elinor Mordaunt’s supernatural short fiction. The stories blend the technologies and social attitudes of modernity with the classic supernatural tropes of the ghost, the haunted house, possession, conjuration from the dead and witchcraft. Each story is an original and compelling contribution to supernatural fiction, making this selection a marvellous new showcase for women’s writing in the genre.

You can order the Kindle edition in the UK here and in the US here, and the epub edition here (and of course buy the ebook from many other ebook retailers).

Our books are available in bookshops worldwide: please ask your bookshop to order our books through Two Rivers / Ingram.

Have you seen our excellent postcards? You can inspect and order them here. 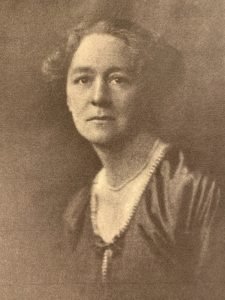 Elinor Mordaunt was the pen name of Evelyn May Clowes (1872-1942), a prolific and popular novelist and short story writer, working in Australia and Britain in the first thirty-five years of the twentieth century.

Stories in The Villa and The Vortex include:

‘What a treat this book is: nine exquisitely written stories from a criminally unsung queen of early twentieth-century weird fiction, gorgeously packaged by Handheld Press, and with a typically sterling introduction by Melissa Edmundson. These are tales to live and lose yourself in – haunting, horrifying, and poignant by turns.’ – Horrified

‘Beautifully continues the Press’s mission to bring forgotten weird fiction back to life, and makes for a wonderfully spooky read just in time for the Halloween season … The Villa and the Vortex is a must-read for those who find themselves drawn to older weird fiction, and for those with a fondness for older supernatural and ghost stories.’ – What Sleeps Beneath

‘ … a period atmosphere and a distinctive, suspenseful power to haunt. “The Villa” could be taken as a lost precursor to Shirley Jackson’s Haunting of Hill House.’ – Michael Caines in the Brixton Review of Books

‘In “The Landlady” a couple find their new house is haunted by a kindly ghost – but she is not quite what she seems. The story also deals with personal attachment to time and place and the emotional draw the past can have on us. In “Four Wallpapers” the haunting is through layers of wall paper that are a portal for the past in a troubled house … Mordaunt appears to have believed in the supernatural, having experienced an apparition in Papua New Guinea, she also had personal experience of premonitions during her life and as a child was raised on a diet of folk legends and ghost stories. The influence of these are sometimes seen in the inspiration for the stories. Evil is also a tangible and real thing, created by malice or madness as it permeates lives and wreaks havoc such as in “The Vortex”. There is no ambivalence about the other worldly nature of her creations. There is reticence though, providing direct experience and little explanation, leaving the reader to piece together the truth.’ – A Ghostly Company, autumn 2021

‘The tales themselves ooze atmosphere throughout a range of familiar set pieces to period supernatural yarns; echoing mansions, remote villages, rolling moors. If you’re here for quintessential haunted worlds to get lost in you won’t be disappointed.’ – Bookmunch

‘The perfect sort of book for this time of year – thoughtful rather than terrifying, with enough atmosphere to give the occasional chill and lots to chew over. Highly recommended.’ – Desperate Reader

‘The Villa and The Vortex gave me hours of pleasure … I thought I knew what was going to happen [in ‘Luz’], but as it turns out, I was not only wrong but I would never have guessed it in a million years … all of the stories in this volume run psychologically deep and often hit at the very souls of her characters … Save the excellent introduction for last but do not pass it by – I’m always amazed at the depth and breadth of Edmundson’s research and knowledge.’ – Oddly Weird Fiction

‘Loneliness, pagan sacrifice, the consequences of fear and obsession (as in “The Vortex” with its playwright who must achieve success no matter what the price), all feature in Mordaunt’s work as origins or causes of haunting … Yet sometimes Mordaunt’s tales verge on the scientific realms of an H G Wells, as in the crazed scientist motif in “Luz” where fear once again plays an integral role, but the central character suffers from a hubris that often overtakes those who dare trifle with the very stuff of life and death itself … “The Countryside” is perhaps Mordaunt’s most potent tale in the volume — a story of folk magic and witchcraft let loose upon the realm of parochial religion with all its usual hallmarks of repression. Witchcraft here marks out the freedom of women’s ways and rebellion against the theological forces that would seek to constrain them within a straitjacket of conventional morality.’ – Dead Reckonings

‘The Villa and The Vortex is another excellent edition from Handheld with Edmundson’s always-engaging and enthusiastic editorial work beautifully presented in the press’s striking and elegant style. The cover art, ‘Klingsor’s Castle’ by Hermann Hendrich, absolutely drips with the sense of stifling despair that often pervades Mordaunt’s writing and Kate Macdonald’s glossary usefully explains some of Mordaunt’s period idiom.’ – Daniel Pietersen in HorrorHomeroom

‘In her well-researched and erudite introduction, Melissa Edmundson examines each story in detail and makes a compelling case for including Mordaunt in the canon of great supernatural writers of the 20th century.’ – To The Ends of the Word

Women’s Weird: the original anthology edited by Melissa Edmundson, but is it the best? Contains thirteen excellent supernatural stories encompassing the boundaries of Weird, and showing what women could write. Includes stories by Edith Wharton, May Sinclair, Margery Lawrence and E Nesbit.

Women’s Weird 2: our second anthology edited by Melissa Edmundson, this collection of short supernatural fiction from 1893 to 1937 covers new geograohical territory with fiction from Canada, Australia, India, the USA and New Zealand.

British Weird: edited by James Machin, this collection of short supernatural fiction from 1981 to 1937 displays an unsettling mastery of Weird preoccupations.

The Outcast and The Rite, by the Australian writer Helen Simpson, this collects the best of her unsettling supernatural writing, adding some little-known stories to her 1925 collection The Baseless Fabric.

From the Abyss, by D K Broster, a spectacularly good collection of the Weird short fiction that this very popular historical novelist wrote alongside her novels of the eighteenth century (to be published 9 August 2022).